Padmanabh Jaini, Master of Buddhist and Jain Studies and cofounder of Berkeley's Group in Buddhist Studies, passes away. 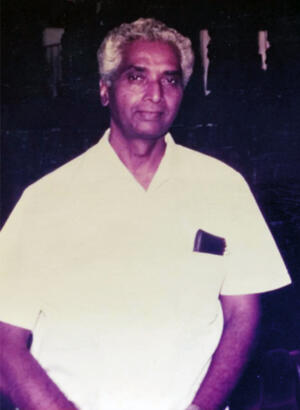 Our revered colleague, teacher and friend, Prof. Padmanabh Srivarma Jaini, master of Buddhist and Jain Studies, passed away on Tuesday May 25, just five months shy from what would have been his 98th birthday. His health had been failing over the last weeks, and he peacefully passed away on his own terms in his home in the Berkeley hills, with his son Arvind at his side, who as medical doctor oversaw his gentle departure. For most of the nearly fifty years that Prof. Jaini lived at Berkeley he walked day in day out some two miles, from his home in Kensington overlooking Tilden Park, down to campus, and in the evening, much more strenuously, up again. This, as well as his frugal lifestyle, kept him in excellent shape, though over the last years he became more frail and finally was forced to abandon this routine. His advanced age in no way affected his mind, and he remained crystal clear until the very end, remembering details and names with great accuracy and leaving us a lovely account of his rich and long life with his Yogāyoga (“Coincidences”) memoir, which includes a complete list of his publications (2019; for details see https://www.telegraphindia.com/opinion/a-world-of-learning-the-journey-of-padmanabh-jaini/cid/1686901).

As emeritus Prof. Jaini continued to be accessible to colleagues and students, taking a deep interest in their work. This included endowing the Padmanabh S. Jaini Graduate Student Award in Buddhist Studies in 2009 to support graduate students. Speaking to his continued investment, only a few weeks before his passing he gave a long and passionate speech about Buddhist Studies and its history at Berkeley, standing on the balcony of his home and addressing the students and faculty of Berkeley’s Buddhist Studies graduate program who had assembled below in the street. Together with Prof. Lewis Lancaster he had founded this program after moving from Ann Arbor (University of Michigan) to Berkeley (University of California) in 1972, where he served as professor until his retirement in 1994. The program allowed him to train an entire generation of Buddhist Studies scholars who came to serve as professors at premier institutions, advancing and institutionalizing the study of Buddhism in the US and beyond. As he said shortly before his passing "my legacy are my books, and my students who went on to be professors and academics.” Jaini’s service to the field of Buddhist Studies as something of an ādiguru is matched by his contributions to the field of Jain Studies, which were duly celebrated in an international symposium on The Study of Jainism held in his honor at Berkeley in October 2013 on the occasion of his 90th birthday. His Festschrift Jainism and Early Buddhism, Essays in Honour of Padmanabh S. Jaini (2003) draws on his specialization in both areas.

Born into a Jain family in coastal Karnataka in 1923, Padmanabh Jaini was trained in Sanskrit, Prakrit and Pali at Nashik (BA Honours from Hamsaraj Pragji Thakarsi College of Arts, 1943-47), Ahmedabad and the University of Bombay (MA awarded in 1949), and at Vidyodaya Pirivena in Sri Lanka, where he received the tipiṭaka ācariya degree in 1951. After appointments as lecturer in Pali at the B.J. Institute in Ahmedabad (1951-52) and at Banaras Hindu University (1952-56), Jaini moved to London, where he earned his PhD under the supervision of John Brough at SOAS (1958). At SOAS he also served as lecturer (1956-64) and reader (1965-67) before being appointed as Professor of Sanskrit and Pali at the University of Michigan (1967-72). His dissertation was dedicated to a study of the Abhidharmadīpa, a less well-known Vaibhāṣika treatise not translated into Tibetan or Chinese. The publication of the critical edition (1959) marks the beginning of a long list of editions, prepared from manuscripts, monographs and articles dedicated to the study of Indian Buddhism. This list includes editions of Pali works, viz. the Milinda-ṭīkā (1961), the Lokaneyyappakaraṇaṃ (1986), the fifty extra-canonical Jātakas Prof. Jaini had discovered in Burma (Paññāsa-Jātaka, 1981-1983; translation 1985-1986), and Saṅgharakkhita’s treatise on rhetoric entitled Subodhālaṅkara together with its commentarial tradition (2000). The list also includes further editions of Sanskrit works, viz. Ratnākaraśānti’s pañjikā (entitled Sāratamā) on the Aṣṭasāhasrikā (1979) and Amṛtacandrasūri’s Laghutattvasphoṭa (1978), a Jain (Digambara) work. Beyond these editions and textual studies Prof. Jaini authored a wide range of articles and book chapters that explore particular aspects of the aforementioned texts, and that are also dedicated to an array of other topics and subjects in the history of Buddhism, albeit with a clear focus on abhidharma and related scholastic traditions. Many of these incisive papers have been brought together in his Collected Papers on Buddhist Studies (2001).

Prof. Jaini’s work on Buddhism stands out not only for the critical acumen, learnedness and precision he has brought to it thanks also to his superb command of Sanskrit and Pali, but also because he has always treated Buddhism as part of the larger Indian religious landscape. This came natural to him because of his intimate knowledge of Jainism and the Brahmanical traditions. His monograph The Jaina Path of Purification (first published in 1979) became a classic that has brought the study and knowledge of Jainism to a broader English speaking public, and his numerous further publications on Jainism have made him something of a founder figure of this field in North America. Beyond his mentioned introduction to Jainism, this includes a detailed monograph dedicated to the study of Gender and Salvation: Jaina Debates on the Spiritual Liberation of Women (1991), a book-length study of “Jain Sectarian Debates: Eighty-four points of contention (Cauryāmsi Bol) Between Śvetāmbaras and Digambaras” (Journal of Indian Philosophy 36, 2008, pp. 1-246), an earlier monograph authored in Hindi on Jain Sampradāy men mokṣa, avatār aur punarjanma (1982), as well as a broad array of articles and book chapters, most of which have been reprinted in his Collected Papers on Jaina Studies (2000).

Prof. Jaini’s rich oeuvre combines the best virtues of Western scholarship with the deep traditional learning in which he was steeped before moving to the west. He was a capacious thinker whose keen interest in religion extended beyond India to the Abrahamic traditions and made him a welcome (though somewhat reluctant) participant in interreligious dialogue (cf. Christianity and Jainism: Professor Padmanabh S. Jaini in conversation with Sir Mark Tully, 2009). More generally he was extraordinarily well read also in areas outside the confines of his academic specialization. His intellectual curiosity and the spirit of unrelenting inquiry he brought to his studies were infectious. He inspired not only his numerous students but also touched the lives of his colleagues and friends with his gentle smile and the generosity with which he shared his seemingly boundless knowledge. Padmanabh Jaini is survived by his son Arvind and his grandson Ashwin.

(Professor in the Department of South and Southeast Asian Studies, and Director of the Group in Buddhist Studies at the University of California, Berkeley)